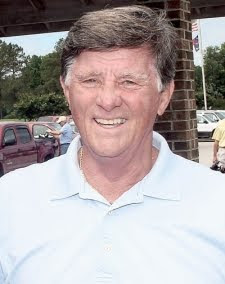 (Note: Thanks to my friend Wilson Times sports editor Paul Durhan for letting me reprint this article on arguably Rocky Mount's greatest athlete ever)

WILSON - Whenever the discussion arises as to who might have been the best all-around high school athlete in the history of North Carolina one name that always pops up is Danny Talbott.

Talbott is somewhat of a sports legend in these parts and his accomplishments while at Rocky Mount Senior High School still border on the unbelievable.

As a three-sport athlete during his senior year (1962-63), he led his teams to 4-A state championships in football, basketball and baseball, a feat not accomplished either before or since and highly unlikely to ever occur again at any level.

Furthermore, Talbott was not only a member of each team but was also its leader and star player, although he's quick to point out that these championships were total team efforts.

Maybe so, but his teammates would probably also admit that without his presence there would likely have been no championships.

Following high school Talbott took his talents to the University of North Carolina where he again played three sports during his freshman year and part of sophomore year.

He eventually had to cut back slightly, though, and eventually dropped basketball but continued a brilliant career as a football quarterback and as a pitcher/first baseman on the baseball team.

Talbott was named Atlantic Coast Conference Football Player of the Year and ACC Athlete of the Year in 1966 and "The Sporting News" named him All-America as a first baseman.

In 2003 he was finally inducted into the North Carolina Sports Hall-of-Fame, an honor which many felt he should have received much earlier.

Talbott, now retired following a 33-year career in the pharmaceutical business, still lives in Rocky Mount with his wife, Myrlene.

He was in town recently to participate in the N. C. Baseball Museum Celebrity Golf Tournament at Wedgewood Public Golf Course and prior to teeing off sat down to discuss several topics including the state of sports in general.

While Talbott readily admits that sports has been an important factor in his life, he also cautions that the sports world has changed greatly since he played and in some ways might be in danger of getting out of hand.

"Athletics is a great training tool for life," he said. "It teaches discipline, relationships and getting along with others but it should be kept in perspective.

"You wonder if some of the young kids playing sports today now are really enjoying what they're doing or if they're there (playing sports) because they're pushed into it by parents living through their kids," he said. "Also, I've got a problem when 8-year-old kids are playing in tournament games on Sunday morning when they should be in church."

Talbott credits several factors for his personal success in athletics.

"The Lord blessed me with the ability but there were lots of good coaches that took a lot of time to teach me," he said. "We were all given different abilities but it just so happened that mine were the kind that got written about more in the paper."

One coach about whom Talbott speaks highly is Henry Trevathan, who coached him in the seventh and eighth grades.

Talbott also praised his teammates, many of whom still live in the area and he sees occasionally.

"I got to play with a great bunch of guys," he said. "We were like a family."

"Some athletes this day and time think they're bigger than life," said Talbott. "I think they need to come down off their pedestals and realize it's (sports) not all about them." Anyone who lived in Wilson or Rocky Mount during the late '50s or early '60s probably remembers the fierce football rivalries between the two high schools during that era and Danny Talbott was right there in the thick of much of the action.

"The Rocky Mount-Wilson rivalry was so strong we each actually had closed practices the week of the game," he recalled. "It was a great rivalry but we (players on both teams) were all good friends."

While here, Talbott got to talk with Trevathan, who was also a guest at the golf tournament and earlier had these comments to make about his former pupil.

"I've seen lots of great athletes in North Carolina but Talbott ranks with the best," said Trevathan. "Once in a while nature comes along and gives us something special and Danny was special."
Posted by Charles Alston