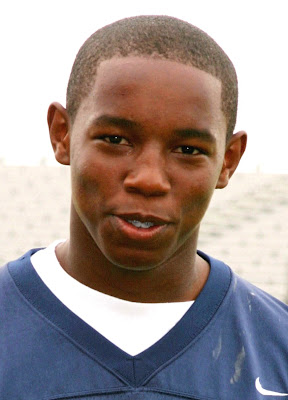 Bring the total of Gryphons from the 2008 football class that are headed to college on a scholarship to six!

Four signed on National Signing Day, and now add defensive end Jermaine Fields and linebacker Chris Pittman to the list.
Fields, who inked with Elizabeth City State the day after his other teammates signed, will join teammate Keith Strickland there. Pittman will join Nick Harrison at UNC-Pembroke. He signed this past week. He chose between the new upstart D-II program and Catawba.

At 6-foot-2 1/2 and 215 pounds, Fields tallied 56 tackles and recorded five sacks. He also recovered three fumbles and deflected two passes. Fields also scored a touchdown this season when he blocked a punt against East Forsyth and recovered it in the end zone for a score.

An NEW 6 All-Conference selection, his best league game was his his nine tackles against Northern Nash.

Pittman, at 6-1, 192 pounds, received a first-team All-Conference nod for the second straight season and was voted as the league's Defensive Player of the Year and the Rocky Mount Telegram's Defensive Player of the Year. The NCPreps.com 3-A All-State selection led the Gryphons in tackles with 97 and had two sacks and two deflected passes. His conference high was his 11 tackles against Northern Nash.

At least two more Gryphons may sign in the coming days.