These hands are record-setting! 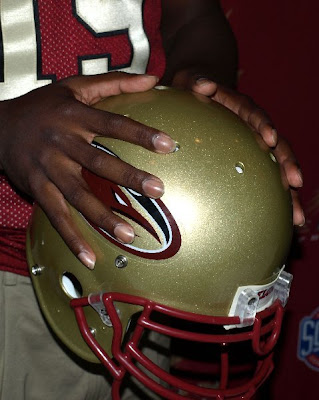 These are the hands of Elon redshirt junior wide receiver Terrell Hudgins. The record-setting former Rocky Mount quarterback was in Spartanburg, S.C. earlier this week at the Southern Conference Football Rouser. Appalachian State was the coaches' preseason pick to win the title, while Elon got one first place vote and placed second in the voting.

Following his sophomore season, Hudgins had piled up 2,501 receiving yards, second in school history. He was also a finalist for the 2007 Walter Payton Award.

Another former Gryphon may be on the team with him - 2007's leading tackler for the Gryphons, Emmanuel Davis. Davis will be attending Elon on an ROTC scholarship, but will be a walk-on with the Phoenix.

To watch a video of Hudgins talking about Elon and the Phoenix's chances at a title, click here.