If you attended the Rocky Mount Invitational Baseball Tournament earlier this week and saw Wilson Hunt play, you might have seen a familiar face in the Warriors' dugout.

Adam Weaver, who played collegiately at UNC and Elon, is now an assistant baseball coach at Hunt. Weaver, who teaches math at Hunt, knows his way around Gryphon Stadium. He was a four-year starter for the Gryphons from 1999 to 2002.

Weaver, whose dad Danny coached him at Rocky Mount, was voted to the Rocky Mount Telegram's Top 50 Greatest Twin Counties Athletes list a few years ago. A shortstop with tremendous range and arm strength, Weaver set the school record for career hits with 121 (also tops in the Twin Counties) - including 27 doubles. He closed his career with a .366 batting average.
I guess I shouldn't be surprised that one his kids, senior catcher Chris Lamm, won the Hits Award for the tournament.

Weaver could also steal bases. He was 60-for-66 in his career as a base thief. And on the odd occasion when his dad told him to go to the mound, he got the job done there, too. He had a 5-0 as a pitcher.

But his ability on the football field was really underrated. He started the 2000 season as quarterback for the Gryphons and passed for 1,127 yards and eight touchdowns. His late touchdown run at New Bern that season gave the Gryphs a huge Big East upset win. He was also the team's second-leading rusher.

He decided that he'd concentrate solely on baseball his senior year.

His Hunt squad lost 4-2 to Rocky Mount in the tournament opener Monday. But a bit of a payback was on his mind.

He was heard to say later that day that Rocky Mount had better watch out for Hunt should they meet again come playoff time.

Looks like he's fully entrenched as a Warrior now, doesn't it!
Posted by Charles Alston No comments:

If you have a desire to see some highlights of the Gryphons' fine 14-1 football season, then click on any of the links below to see some clips of games from the 2007 campaign. These are all from WRAL's Football Friday Show with Rocky Mount native Tom Suiter. 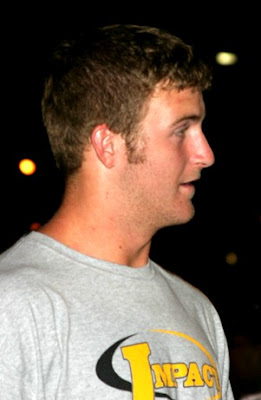 Waldrep, a lefty who stands 6-foot-5 and weighs around 200 pounds, made a verbal commitment to the school this week according to the ImpactBaseball.com website.

Waldrep, who left Rocky Mount after a stellar sophomore season, has spent the last two years playing both basketball and baseball at South Brunswick in Southport.

In 2006, Waldrep was the NEW 6 Baseball Player of the Year - going 4-2 and setting a school record for the lowest ERA in school history - 0.15 - the fourth lowest in N.C. state history.

Here is an excerpt from a column by the Wilmington Star-News sports writer Chuck Carree about Waldrep's draft chances come June:

At 6-foot-5, 205, Waldrep intrigues me because I know little about him, except he played high school basketball and he is left-handed.

"I don't know if he is one everybody is on,'' said one scout, who described him as a sleeper.

Waldrep pitches comfortably at 86-87 mph and tops out at 88 mph.

"He is a guy I would at least like to keep an eye on,'' the scout said. "I only saw him briefly. He is a big kid. His arm worked OK and his throwing angles are good. He might be throwing harder than that in a couple of years.''

Waldrep is leaning toward signing with either Appalachian State or Elon after deciding not to pursue college basketball. He has qualified academically with more than 1,200 on the SAT and a 3.5 grade-point average.

Last week, Elon saw him pitch against Hoggard, when he threw three innings and struck out eight and allowed one unearned run. He says only two players made contact for outs. The run he allowed reached on a passed ball.

"He's got potential,'' said South Brunswick coach Lee Shelton. "I don't think he has fully been tapped out.''

Waldrep said his curve has improved since he received pointers last summer at Appalachian State's camp, where he said they clocked his fastball at 90 mph. He also throws changeups down in the strike zone to keep hitters off balance.

To solidify his future draft status, he hopes to add several miles per hour to his fastball.

"I have to learn to focus a little bit better too,'' he said.

While I have never seen Waldrep pitch, my guess is he will benefit from three years of college. The same can be said of virtually every high school senior.
Posted by Charles Alston No comments: