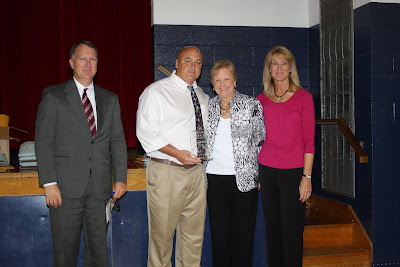 However, his athletes most frequently remember that Coach Whitley taught them to be humble winners and to be dignified in losses and to always strive to be the very best person possible both on and off the field.

Foster serves as an outstanding role model not only for athletes, but for fellow coaches as well. He stresses character and excelling in the classroom as much if not more than excelling on the field of play.

Foster has been a role model and a mentor to athletes throughout his career and has been instrumental in shaping and impacting the lives of many student-athletes at Southern Nash High School.

NRMPS Athletic Director Angie Miller commented, “The award presented tonight is a very special award that shows true dedication to the athletic program at Nash-Rocky Mount Public Schools. Mr. Whitley was a well-respected man with the highest values and principles. This first memorial award went to a very deserving coach and teacher, Brian Foster. He is extremely dedicated to his students and athletes. Foster is a strong role model for students at NRMPS. It has been my honor to have known Mr. Whitley and Coach Foster. These two men are what make athletics such a powerful and rewarding profession.”

Southern Nash High School Principal, Rosalie Bardin added, "Mr. Foster is the epitomy of a role model for our students and staff. He is caring, dedicated and sincere with all students. In many instances, Brian is a father figure to students. He is a person that students can rely and depend upon to provide guidance and advice on issues they are facing. Mr. Foster helps students make the right decision both on and off the field. We are truly grateful that Brian is member of the SNHS team and congratulate him on receiving the very first Dudley Whitley Memorial Award."
Posted by Charles Alston No comments: