NCPreps.com has released its 2010 Top 20 Preseason High School Football Teams for each classification.
Rocky Mount has been voted 19th in the 3-A Class poll.

These polls were voted on by the state's head coaches.

This information and much more will be included in the newest edition NC Prep Football News Yearbook that will be available around the first of July. The book will have 138 pages this year.

Anyone that wishes to buy a copy can contact Deana King at http://us.mc537.mail.yahoo.com/mc/compose?to=gatarams@yahoo.com for details. The cost is $20 at a store or $25 priority mail. 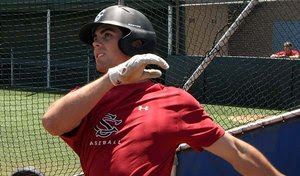 South Carolina may be on the verge of elimination at the College Baseball World Series, but one former Gryphon is still glad to be in Omaha.

Former Rocky Mount two-sport athlete Bill Merrifield (RMHS Class of '80) is in Omaha watching his son Whit play for the Gamecocks as they face elimination today when they play Arizona State.

Whit, a junior infielder/outfielder, and his teammates lost their opening game to Oklahoma (4-3). Two losses and they're headed back to Columbia.

Whit, who had a 26-game hitting streak going earlier this season, was picked in the ninth round of the 2010 MLB Draft earlier in the month. He was the 269th overall pick in the draft by the Kansas City Royals.

He played his prep career at Davie County High School.

With the likes of Rocky Mount's all-time RBI leader Ben Fish and former Nash Central great Xavier Macklin gone from the squad, some may have thought there might be an offensive drop off with the 2010 version of Coleman-Pitt Post 58's American Legion baseball team.

The win was also its fourth in three days as it won a doubleheader over Ahoskie at home Saturday (11-0, 5-0) and beat longtime rival Wayne County Post 11 8-4 Sunday at N.C. Wesleyan Bauer Field.

Players like Nash Central's T.J. Taylor and Rocky Mount's Collins Cuthrell have provided much of the pop to Post 58's offense this summer.

Taylor, who will play at Wake Community College next season, and Cuthrell, who has signed with Barton College, hit back-to-back homers Monday to power Post 58 past Ahoskie. For Taylor, who leads off for Post 58, it was his team-leading seventh dinger of the season while Cuthrell unloaded his fifth.

Tyler Clark, a rising sophomore at N.C. Wesleyan and a former Northern Nash Knight, joined the team last week and has made an immediate contribution. He had a two-run home run Monday as part of Post 58's 12-hit attack.

Clark, who has played just six games, leads the team with a .476 batting average.

Despite not playing home games at the smaller field at Northern Nash, Post 58's offensive prowess has continued (a .315 team batting average, 22 home runs and nearly eight runs a game through 15 contests). Five Post 58 starters are batting at least .400 (the others are Thomas Berry .438; Cuthrell .421; Taylor .420; and Matthew Berry .400).

Where the team (12-3, 5-0 Area I East) may have improved most is in its depth of pitching. Former Tarboro standout and current Barton player Kyle Norville, who is more known for his bat, got the win in Ahoskie - going 5 1/3 innings. Eight different Post 58 pitchers have recorded at least one win this summer.

Even former Rocky Mount lefty Hobbs Johnson, who is in summer school at North Carolina, returns to play for the squad on the weekends. He got the win Sunday in Post 58's victory over Wayne County.
Posted by Charles Alston No comments: