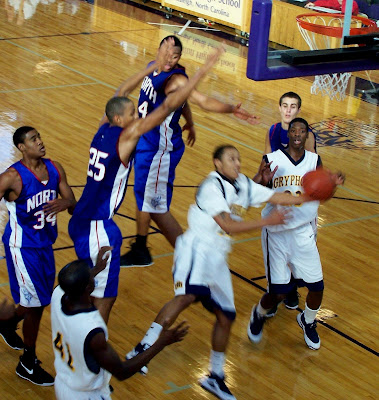 Rocky Mount's return to the Glaxo has been one of nostalgia for me. People with ties to Rocky Mount have been popping up all over the place. In some ways, it's been like a reunion of sorts.

Who do I run into but Jerome Garrett, starting forward for the Gryphons' 1982 4-A state championship team. Now a resident of Raleigh, Garrett is attending the event to watch his son, Jerome Jr., play as a starter for Raleigh Enloe. I hadn't seen Garrett, Sr. since he and his teammates hoisted that championship trophy up as a team that great evening in March at the Greensboro Coliseum 26 years ago.

Yes, we turned the clock back for a few minutes, you might say!.

When I walked into the gym Monday, I was greeted by my old high school classmate Paul Thomas (RMSH '76). Thomas, uncle of recently graduated RMHS athlete Ashley Pearsall and a former Gryphon football player himself, is an accountant in the Raleigh area and a former Triangle area high school football official until knee problems ended that phase of his life.

He informed me that he was going to be the incoming president of Broughton's Booster Club. Considering how successful the Caps' athletic program usually is, that should be a pie job for him.

To top the day off, I had about a 15-minute conversation with recently "retired" WRAL-TV5 sports anchor and Rocky Mount native Tom Suiter.

He and a friend of his dropped in to check out the Christ School-Kinston game - something he normally wouldn't have time for during his old working schedule. Christ School, located just south of Asheville near the town of Arden, is where Suiter attended school from age 13 through graduation.

He told me that wouldn't miss the grind of making the day-to-day telecasts, and contrary to popular belief, he has not confirmed to WRAL as of yet whether he will host the "Football Friday" program next fall.

Suiter, now 60, looked a bit weary and very ready for a nice long break from everything. He complained of arthritis in both his hands. Shaking hands with people can be painful for him, so he prefers an elbow bump, not unlike the fist bump made famous by misophobe (fear of germs)/comedian/game show host Howie Mandell.

I told him fall football without him would not be the same unless he came back. He feels that without that daily grind he's been making, doing the show after all that time off the air might not be pretty.

Tom, it's like riding a bike. Once you learn, you never forget. If anything, the time off should give you time to recharge your batteries.

We all hope that you will make your return next August. High school football in this area just won't be the same without you!