Football on the air!

- WRMT 1490's Wes Bradshaw and WZAX 99.3's Dave Richmond
If you like to listen to high school football on the radio, then you will be on Cloud 9 the next few months.

WZAX 99.3 FM will carry the "Game of the Week" broadcast each Friday starting two days from now with the Wilson Beddingfield @ Northern Nash game.
Gone is Tony Doughtie from the booth. He will be replaced by Dave Richmond, a one-time football coach at the N.C. School for the Deaf. He will join longtime radio personality Paul Andre in calling all the games. 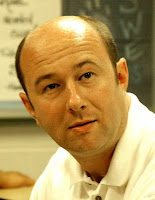 Here is this season's Game of the Week schedule:

Rocky Mount football will again be carried on WRMT Sports Radio 1490 AM with Bob Maloney handling the play-by-play and new addition Wes Bradshaw taking over the color commentary spot. Bradshaw, the longtime public address announcer for Gryphon football, will see his PA job taken over by Wayne Wallace.

WRMT, however, will not cover the Gryphons' opener Friday due to the fact that when advertising was sold for the season, RMHS had no endowment opponent in place. Northampton-East was a last-minute fill-in on the schedule in mid-July. So if you want to know what's going on with the Rams and the Gryphons, you got to come out to the Rocky Mount Athletic Complex!

Another programming note, next week's WRMT broadcast of the Wilson Hunt-Rocky Mount game will be bumped by a Carolina Panthers preseason game. The Hunt-RM game will be taped and it will air on Saturday morning. The game, however, will be on the air as a part of the "Game of the Week" package.
Posted by Charles Alston No comments: