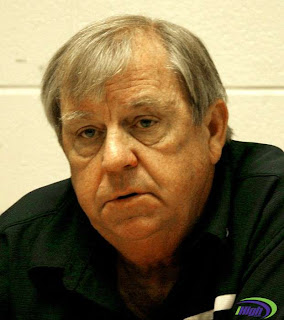 Rocky Mount head coach B.W. Holt wants families involved with his team. Their support, he believes, is vital to his squad's success.
So a little old rule didn't stop him and his coaches at Nash Central Friday night from having their traditional post-game meeting with his team - with their families and friends listening on.
Nash Central had sent word Thursday, via AD Mike Gainey, that no one would be allowed on the field at the conclusion of the game.
Holt found a way around that - bring his players to their families.
Instead of holding his post-game talk on the field, he had the entire team move over to the base of the visitors' bleachers and held his meeting where family members could come down and listen to what he and his coaches had to say to his squad.
I would have never have thought of doing that, personally, but Holt is always thinking!
Great move on you and your staff's part, Coach. I know the families appreciated it.

It might be hard to believe, but before Friday night, the Gryphons hadn't scored a special teams touchdown since game No. 2 on Jordan Ford's game-opening kickoff return at Wilson Hunt.

And poor Brian Goodwin was due. He has so many returns this season that have almost resulted in a score. His spectacular 65-yard touchdown punt return was awesome. He had to go almost 10 yards backwards to reach the right sideline. Then, with a lane set up past the RMSH team and coaches, he, with some key blocks, tightroped it to the end zone.

And I have a trivia question for you. Prior to Hiawatha Bunn's interception return for a score, who was the last Gryphon to pull off that feat?

The answer: Jacobi Jenkins against South Granville in the second round of the playoffs last season (a 52-0 RMHS rout). He returned it 71 yards for a score. That was the only one in 2007.

Gryphon stat notes after Game No. 10

1. One more field goal for Nick Hahula will give him a new school record. He currently holds the record – set in 2007, and tied in 2008 at seven.

2. RMHS has recorded four shutouts this season, tying the same number by the 2007 squad. The school record for shutouts in a season is 6 – set by the state championship 1963 team.

5. Friday, Nick Hahula passed Stephan Virgil for the second-most games played on a RMHS varsity football team – 48. The record is held by Darrius Dubose with 53. Whit Barnes is nearing the “40 Club” at 38 games played.

10. If Strickland gets 106 more yards in passes, he will set the school record for yards receiving in a season. The record is 1,073 set by Mike Mason in 2002. It took Mason a school-record 64 catches to get that record. Strickland will likely do it with a bit over 40. He currently has 36 receptions - averaging an astounding 28.5 yards per catch!

Next for Strickland would be the Twin Counties record - currently held by North Edgecombe's Cornelius Young who caught passes (40) for 1,123 yards in 1993.
Posted by Charles Alston No comments: