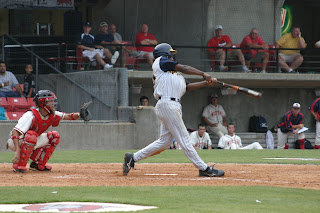 Are there any more words you can say about Brian Goodwin?
I am running out of them. I have no idea what I may do next spring if this guy keeps getting better - perhaps invest in a thesaurus!
It's almost scary.
Goodwin continued his run on MVP awards Saturday with picking up one at the Aflac All-America High School Baseball All-Star Game at Los Angeles' Dodger Stadium. Goodwin, the MVP of the NCHSAA 3-A state baseball championship series for the Gryphons, delivered a two-run opposite -field double for his East squad that tied the game in the ninth at 2-all.
He then stole third and came home with the game-winning run on an error. The East won the game 4-2. Goodwin was 2-for-4, with two RBI and a stolen base.
In the post-game ceremonies, he was handed his MVP trophy by Al Johnson, vice president of marketing services for Aflac, who proudly called out the city "Rocky Mount, N.C." before giving Goodwin his award.
Why was he so boastful about the Rock City?
Perhaps because Johnson, who now lives in Columbus, Ga. - the corporate home Aflac, grew up just up N.C. 258 North less than an hour away from Rocky Mount in Northampton County and played sports at Northampton-East. He also was a football walk-on for Mack Brown when he was head coach at UNC.
I imagine the thought of having two northeastern N.C. boys standing in Los Angeles on the infield at Dodger Stadium on a glorious Saturday afternoon had to have brought some Tar Heel pride to his heart.
But his head wasn't in the same place when he called Brian "Godwin!"
Oh well, as long as they spell his name right on the trophy, right?