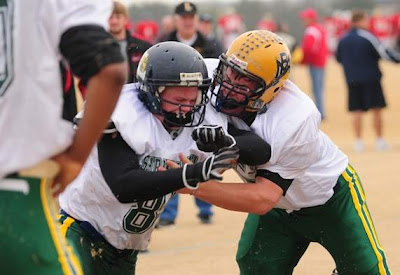 The Wake Forest recruit, who wore No. 50 during his 48-game career at RMHS, will wear No. 51 in Saturday's contest. (Click on picture to enlarge)

To see some action footage of Barnes practicing this week, click here!

Richwalski will not be a candidate for the NN football job

Northern Nash athletic director Dan Richwalski stated Monday that he will not be a candidate for the head football coaching position at the school. He said he was informed by the Nash-Rocky Mount Schools central office that he could hold both positions at the school.

That pattern will continue next year when SouthWest Edgecombe leaves the league and Wilson Hunt joins it. Hunt's AD Stevie Hinnant is an assistant coach with Warriors' football team.