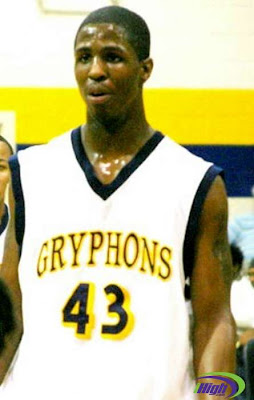 By Tim Stevens
Raleigh News and Observer
Tashawn Mabry, the career basketball scoring leader at Rocky Mount High, expects to make his college commitment this week.
He is expected to pick from among N.C. State, Providence, Connecticut, UNC Wilmington, Western Kentucky and Rhode Island.Mabry said State had offered him a scholarship and had been recruiting him since his freshman year.
Last Thursday he went to campus and talked with players and coaches."I'll make my final decision next week," he said Friday.
Mabry is a 6-foot-5 forward who led Rocky Mount to the NCHSAA 3-A championship. He was the most valuable player in the championship game, an 84-79 victory over Concord. He had 26 points and 10 rebounds in the win.He averaged 24.2 points, 8.2 rebounds, 4.5 blocks, 1.5 steals and 1.4 assists.
He finished his career with 2,411 points, passing former Gryphons point guard Phil Ford to become the school's all-time scorer."I am achieving everything that I had dreamed of," Mabry said. "It is really unbelievable."

Mabry said he talked regularly with Raleigh Word of God's C.J. Leslie, a McDonald's All American who also is considering N.C. State."C.J. is my boy," Mabry said. "We talked about what a great class it would be if we both decided to go there with Ryan Harrow and Lorenzo Brown, but both of us need to make the best decision for ourselves and our families."

Mabry said his decision would come down to where he thought he could get the best education and where he could develop his basketball abilities the most.
Posted by Charles Alston No comments: