Moser, 44, has suffered through several years of health problems since stepping down at Graham in 2004. He led Graham to consecutive NCHSAA 1-A state championships in 1999 and 2000.

He was 71-24 in his eight seasons at Graham.
Posted by Charles Alston No comments: 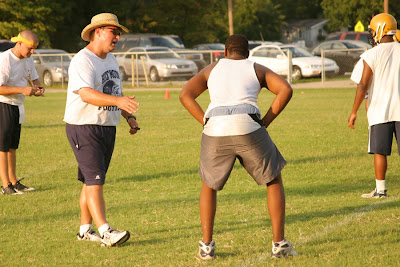 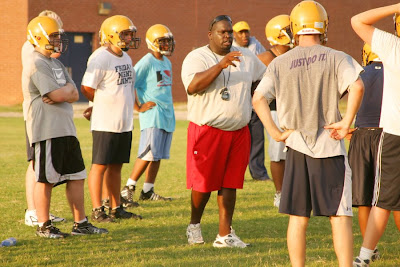 Here are Rocky Mount's new men on campus - or should I say, gridiron.

In the top photo, new head Gryphon football coach Dickie Schock gives out some instruction during Monday's practice - Day 2 of the 2009 preseason. The offense will get most of Schock's attention this season as offensive coordinator Jason Battle will not be returning to the staff this season.

In the bottom photo, new assistant coach Elbert Thomas (red shorts) has a talk with potential offensive linemen. Thomas, who most recently was the head coach at West Montgomery, will guide the offensive line.