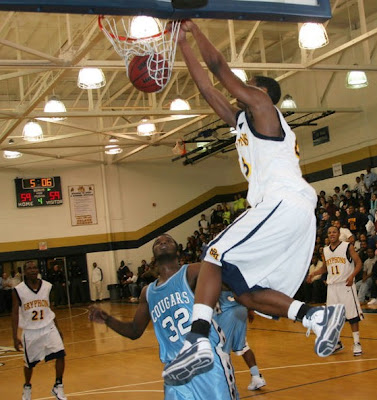 This is a great shot taken of Rocky Mount's Tashawn Mabry on a alley-oop pass from Antoine Williams for a dunk against SouthWest Edgecombe in the NEW 6 Conference Tournament finals last Friday evening.
With the game tied at 59-all, Mabry's basket allowed the Gryphons to pull away for the win!
(Photo/David Hahula)
Posted by Charles Alston No comments: 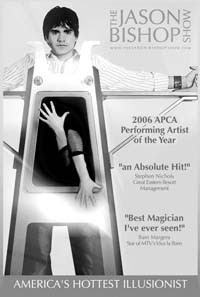 Being a North Carolina Wesleyan graduate, I wish to give some publicity to an event slated to take place at the Dunn Center. Here's one you don't want to miss!

It might be 60 degrees outside in Rocky Mount, N.C. on March 1, but it will be snowing inside.

Jason Bishop, an award-winning illusionist, will be performing at the Dunn Center at N.C. Wesleyan College on March 1 at 8 p.m. and -- hold onto your hat -- snow will magically come flying down from the rafters, literally showering the audience.

But that's not all. Interacting with members of the audience, Bishop will turn some lucky person's one dollar bill into $100.

Believing that you have to bring magic into the future, Bishop combines cutting edge technology, LCD and Plasma screens, an iPod Touch, state-of-the-art lighting, and a rocking contemporary soundtrack as the backdrop for his stunning magical displays. Like David Copperfield and Criss Angel, Bishop is one of the country's most versatile illusionists.

Don't miss the Jason Bishop Show performing live at the Dunn Center for Performing Arts at N.C. Wesleyan College on March 1 at 8 p.m.

Tickets are $15 to $20 and can be purchased at www.ncwc.edu/arts/DunnCenter. To see clips from Bishop's performances visit http://www.thejasonbishopshow.com/.

The Twin Counties will see six girls teams and four boys teams hit the hardwood for the first round of the N.C. High School Athletic Association state basketball playoffs.

For the girls, Rocky Mount, SouthWest Edgecombe, Southern Nash, Tarboro and North Edgecombe knew they were in before this past weekend. Northern Nash was the last one asked to the dance as the Lady Knights were issued a wild card berth into the party Saturday afternoon.

RMHS, Southern Nash and Tarboro will have the home-court advantage for the first round.

The girls start sectional play Monday, while the boys begin on Tuesday. All games will start at 7 p.m.

Here is the first-round schedule for all the area teams:

# - Since North Edgecombe plays Camden in both boys and girls, both games may be played on the same evening!
Posted by Charles Alston No comments:

Here are the 2008 NEW 6 Conference All-Tournament Teams as announced Friday at the conclusion of the league's tournaments at Wilson Fike:

I talked to Wilson Fike athletic director John Gay after the Fike-Rocky Mount basketball game Tuesday evening about the condition of Golden Demons' head baseball coach Will Flowers.
As reported here, Flowers suffered a stroke in January and was hospitalized at Pitt Memorial Hospital.
I am glad to report that Flowers did return home after a few weeks in the hospital and is feeling well enough to attend Fike's baseball practices. But he's not back coaching quite yet, nor is he is back teaching at Fike.
His speech, which was affected by the stroke, is returning back to normal, but he hasn't regained the strength he had before his incident. Fike's assistant coaches are conducting the practices, which officially started this past Monday.
Let's pray that Will continues to improve. I'd love to see him coaching in the dugout at Gryphon Stadium when Fike comes calling on the Gryphons on April 3.
Posted by Charles Alston No comments:

We won't have a long wait for the next 1,000-point scorer

As most of you know, Rocky Mount sophomore Tashawn Mabry topped the 1,000-point scoring mark last week. Gryphon fans had to wait 26 years to see a boys basketball player reach that feat.

And the last female to reach that milestone was guard Latoya Armstrong back in 2003. Armstrong is No. 3 on the girls all-time scoring list with 1,127 points.

It won't be another 26 to see a male hit that mark, and it won't be long before Kim Taylor, Danielle Powell and Armstrong will have company in the 1,000-point club.

For the boys, current Rocky Mount point guard Alonzo Sharpe could quite possibly make it by the end of next season. Sharpe, coming off a career-high 28 points Friday against SouthWest Edgecombe, topped the 700-point level and is at 703 - with the rest of this season and all of the 2008-09 campaign ahead of him.

Also, should junior forward Montrell Battle be eligible to play next season and remains so for the whole season, he could reached the mark, too. At this juncture, he has 718 points as a Gryphon.

Now for the girls.

Junior forward Dyonna Battle may be the first of the bunch to get there, however.

Battle, brother of former RMHS sports standout Jemonte Battle (Class of 2000), has scored 758 points. She should top 800 before the season ends, so she should hit the 1,000-point mark near or just after Christmas next season.

The reason all these players are making a bid for 1,000 points is that all three had productive scoring seasons as freshmen, and they have steadily built on their point production each of the ensuing seasons.

So it's very conceivable that three RMHS hoopsters could well join the 1,000-point club in the same season.
Posted by Charles Alston No comments: 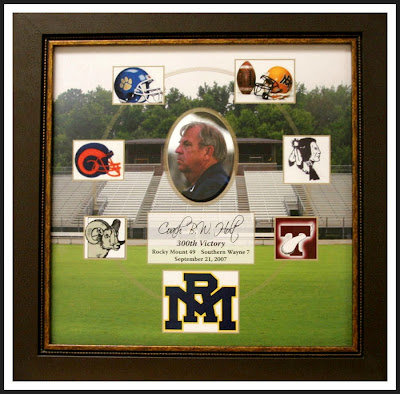 Above is a picture of the plaque that Rocky Mount alum Gene Taylor and myself came up with to give to Rocky Mount football coach B.W. Holt to commemorate his 300th career win back in September.

Due to production delays, we weren't able to give it to Coach Holt until just before the Christmas holidays, despite the fact that we wanted to present it to Holt in a public forum.

So to the many people who helped fund this project, thank you.

And since most of you never had a chance to see the final product, click on the picture to see a bigger version of the project.

Coach Holt now has it proudly hanging in his home in Bristol, Tn. 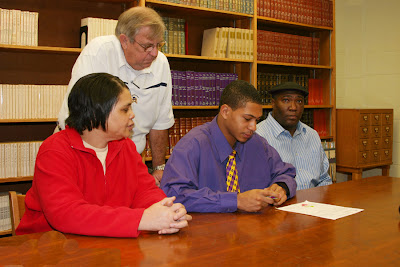 Only Ford will have made the club quicker. Mabry, who is averaging nearly 24 points a game, will have reached the milestone in just 45 games.

It's been over 25 years since anyone has reached the mark, although several have gotten close - including - Larry Lucas, Terrell Hudgins and Shelton Whitaker.
Posted by Charles Alston No comments:

The Firebirds boasted NEW 6 champions in Buddy Tom at 119 pounds, and senior Matt Watson at 189, while the Cougars had Landon Lucas at 103.

Fike was fifth with 62 points, one head of SouthWest Edgecombe. The Golden Demons' best showings were third-place finishes by Vincent Webb at 112, Hunter Myers at 152 and Cameron Jernigan at 215.

Southern Nash's Matt Swanson was the runner-up at 125 while Firebirds teammate Darryl Emig was second at 130.

Lucas ran his record to 12-0 with a pin of Nash Central's Miles Pringle at 3:47. Ken Mooring at 189 and Adrian Smith at 285 finished third for the Cougars.

Rocky Mount and Nash Central each had four individual champions. The Gryphons and the Bulldogs move onto the N.C. High School Athletic Association 3-A dual-team playoffs, beginning today.

The 3-A East Regional tournament will be held at Winterville's South Central High on Friday and Saturday, Feb. 15-16. Individual regional assignments will be announced at the conclusion of the dual-team playoffs this weekend.

Editor's note - This is RMHS' fifth conference title of the 2007-08 sports season.