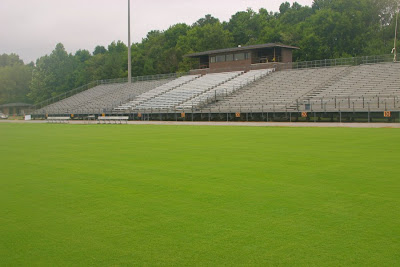 WEAKNESSES: Depth on the offensive line and defensive front.

2008 OUTLOOK: "It could be a good year if we can develop the right chemistry."

BRIAN GOODWIN (Athlete, 6-1, 182, 4.4) - All-Conference perfomer as a kick returner and a defensive back. Two-year starter. As a returner, he brought back two punts for touchdowns and two kickoffs for scores in 2007. Good hitter from his safety position (42 tackles, three pass deflections, two fumble recoveries and an interception). He may see some time at QB in 2008. Has baseball scholarship offer from UNC. College prospect.

NICK HARRISON (DE, 6-3, 215, 4.75) - All-Conference performer. Led team in sacks with seven. Recorded 39 tackles and recovered a fumble. Very quick and strong, Can play at the next level. Started all 15 games as a junior. College prospect.