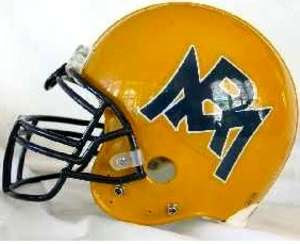 So you Rocky Mount football fans could to get to know new head coach Dickie Schock a bit better, I posed 10 questions for him to answer - five about the football program and five about him personally.
Here are his responses - in italics!

1. Will you be bringing in any assistant coaches with you? If so, are any on board yet?
Hopefully. Nothing is finalized yet.

3. The most-often asked question I have gotten from RM fans since you were hired is "will he pass more than BW?" OK, will you? Do you embrace the passing game more than BW did?
Embrace winning. Running or throwing is far less important.

4. Does having a complete rookie starting offensive line your biggest concern of 2009?
No. My biggest concerns are filling out the coaching staff and getting to know our players and what they do best.

5. What do you plan to coach this fall? You had the "D" and special teams last time you were here and you were OC at WF-R. So what will you do here?
I will run the offense. The defensive side of the ball is in good shape staff-wise. Coach (J.J.) Jones and Coach (Kent) Cox called the defense last year and did a great job. Coach (Gerald) Costen is over there to keep them straight. Coach (Alan) Hess is an asset on special teams, so that leaves me with the offense.

6. Now some to some personal stuff. What are your favorite professional football, basketball and baseball teams?
Raiders, Knicks, Reds.

7. You've heard this one before, but I always find the answers interesting. If you could host a dinner party of five and anyone, alive or dead, could attend, what four persons would you invite and why?
No time for dinner parties until after the season. By then, I'll know whether to invite Lombardi or Bryant - or maybe both.

8. What is your favorite movie of all-time?
The books are always better - "To Kill a Mockingbird."

9. Who are your all-time favorite actor and actress?
I'm not that interested in movies.

10. If you were stuck on a desert island with a portable DVD player with one DVD of one of the episodes from a TV classic, what show would it be?
Probably an episode of NCIS, though it's hardly a classic.
Posted by Charles Alston 3 comments: