Moss gets a piece of another RMHS record 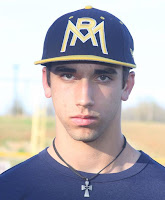 Who would have thought that Rocky Mount senior Benton Moss, who has set almost every meaningful career pitching record at the school, would actually get a piece of a single game hitting record.
But he did Tuesday night as he had four hits, including his first grand slam, against Southern Nash in the Gryphons' 13-1, five-inning Big East Conference victory. He knocked in seven runs, which tied a school record for a game. Look below to see the players he tied.
He went also 4-for-4 - the first Gryphon to do so since Collins Cuthrell did the trick against Northern Nash in 2009. Five hits in a game is the school record set by Danny Talbott (5-for-6) 1961 vs. Fayetteville High (now called Terry Sanford) and Dee Whitley (5-for-6) in 1978 against Northern Nash.
RMHS BASEBALL RECORD BOOK
Most RBI in a game:
7 - Benton Moss vs. Southern Nash, 2011
7 - Jon-Charles Harrell vs. New Bern, 1998