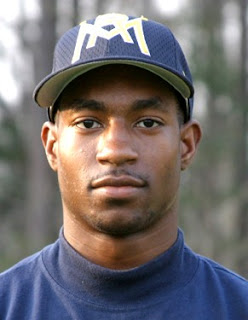 About 16 months ago, both Northern Nash pitcher Tyler Joyner and Rocky Mount outfielder Brian Goodwin, as rising juniors, announced their verbal commitments to play college baseball.
Last week, they stayed true to their word by putting it in writing.
Both, now seniors, signed national letters of intent to those schools.
Joyner, who grew up an East Carolina sports fan, signed with the Pirates and head coach and Rocky Mount resident Billy Godwin.
Goodwin, a lifelong UNC Tar Heels devotee, inked with Mike Fox’s boys in blue in Chapel Hill.They are the first Nash County players to sign with a Div. I baseball program in the same year since Rocky Mount’s Carter Harrell and Paul Jenkins both signed with UNC in 2001.
The two, longtime friends and adversaries, just couldn’t wait until the national signing date (Nov. 12) to come around.
“I was just waiting for the day that I could sign,” said Joyner, a 6-foot, 180-pound lefty who has topped out at 91 miles an hour but consistently throws in the high 80s. “I knew back then that ECU was the place for me. It was just a matter of time for me to make it official.
“I had no intention of going anywhere else,” he said. “It’s the perfect place for me. Coach Godwin has been just great through out the whole process. He was just a phone call away whenever I needed information, or wanted something, he was right there. He’s a great coach and I can’t wait to play for him.”
Goodwin, the MVP of the NCHSAA 3-A state championship series for the Gryphons, says joining the Tar Heels is like being with family.
“They (the coaches and players) just make you feel welcomed, like you’re at home,” said Goodwin, a 6-1, 181-pound All-American who played in two national All-Star games (Aflac, Under Armour) last summer. “I never got that feeling anywhere else. They took a deep interest in me from the beginning and they never stopped staying in touch with me. They let me know that I was really wanted.
“And there’s nothing not to like about the program at UNC,” said Goodwin, who batted .473 for the Gryphons last season to go with his state-leading 15 doubles, 45 runs scored and 21 RBI. “They’ve been to the World Series the last two seasons, they will have a great new baseball park when I get there and the school is fantastic.”
Goodwin is in line to become Rocky Mount’s career leader in hits, stolen bases, doubles and triples this coming season.
Joyner has been a cornerstone of the Knights’ program the last two seasons. A two-time All-NEW 6 Conference performer, he has compiled a career record of 20-6 with 261 strikeouts and an ERA just below 1.50. Northern’s most successful seasons in the last decade have come during his tenure (54-25 over the last three seasons).
With all the official stuff behind him, he knows he has to concentrate on being a better athlete for his team this coming season and for the future as a Pirate.
“I’m really working hard to get stronger and gain more control of my pitches,” said Joyner, who not only credits people like former Babe Ruth coach Travis Ward, former Northern head coach Al Carter and current Knights coach Eddie Loesner for his success, but he put his dad Ricky at the top of the list. “My dad was my first coach and he instilled the basics of baseball in me. He put me on the road to success.”
Goodwin, who is moonlighting as a starting defensive back and kick returner for top-ranked Rocky Mount football team, gives much of the credit for his good fortune on the diamond to Rocky Mount head coach Pat Smith and his assistant coach Jason Battle.
“Coach Smith took me under his wing in the ninth grade and taught me more about the mental side of the game,” he said. “He is always encouraging me to be the best player I can be.“Coach Battle has made me a better outfielder with the drills he’s taught me. He’s helped me a lot on playing my position in center field.”
Both have aspirations of being starters as freshmen when they hit campus in Greenville and Chapel Hill, respectively.
But for now, Goodwin has his sights on another state championship ring and Joyner would be glad to deny him with one for himself.
Posted by Charles Alston No comments: