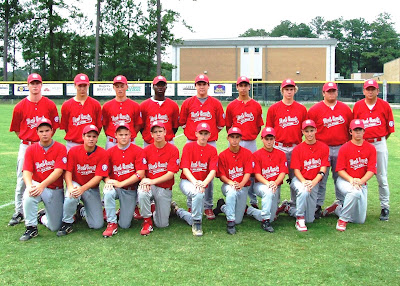 (Click on picture for a bigger view)
LAURINBURG - Nash County's 14U Babe Ruth All-Stars won the Eastern North Carolina state championship Monday evening with a 10-3 victory over host Laurinburg. Nash County will be making a trip to the Southeast Regionals - this year in Lumberton at Lumberton High School starting Aug. 3.
If the team reaches the Babe Ruth World Series, it won't have far to go either. After playing in Wilson last summer, it's being held a little over two hours up I-95 in Glen Allen, Va., just north of Richmond.

It's a family affair when it comes to Nash County's coaching staff. The manager is former Gryphon football and baseball player Britt Johnson and he is being assisted by Will Johnson, his brother and another ex-Gryphon (football and baseball at RMHS and current Barton baseball player). Also assiting him is their dad Don Johnson, a fixture in Gryphon athletics since 1972. Don, a 1975 RMSH grad, was a manager with the football and baseball team and played on the basketball team. Since the late 90s, Don, who is also a high school and college basketball official as well as a baseball umpire, can be seen at RMHS football games helping out with players' equipment.

"Coming into this All-Star season, we told our guys that the 14-year-olds of Nash County had won the last three state championships," manager Britt Johnson said Tuesday afternoon. "This team decided very quickly that it did not want to be the one to break that streak.

"After we won the districts, we knew that to win the state's we were going to have to play much better than we had been and we needed to start swinging the bats," Johnson added. "Our pitching has been the strong point of this team from the beginning and we knew we had the arms, but we needed more offensive production."

After an opening loss in Laurinburg, Nash County had to climb its way back through the loser's bracket to win six straight games for the title.

Here is a list of Nash County's players and the high schools they will attend this fall, which includes five future Gryphons and one who at RMHS last year: