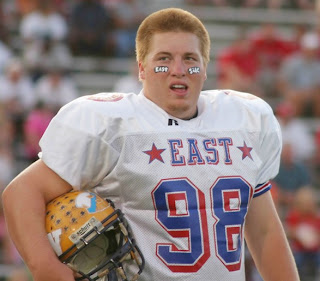 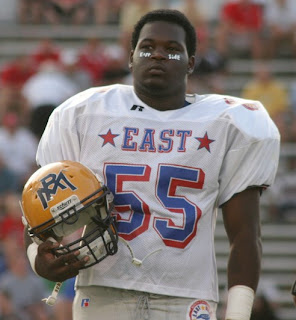 Former Gryphons Nick Hahula (top) and Torey Lee, playing for the East squad, are introduced to the crowd at the 61st NCCA East-West All-Star Football Game Wednesday in Greensboro. The East won the game 6-0. (Photos/David Hahula)

Both played vital roles in the East's win in the event (a 6-0 victory over the West) before an announced crowd of 8,643 at Grimsley High's Jamieson Stadium.

Lee, playing at left guard, helped make holes for the East backs on their only scoring drive of the night - a 13-play, 71-play drive that culminated in a 5-yard scoring run by Chapel Hill's Steven Moore with 9:11 left in the game.

Hahula, who handled the night's kicking duties, missed the ensuing PAT (blocked), but seconds later, he buried the kickoff into the end zone that penned the West at its 20. Twice more in the quarter, Hahula kicked punts that took all the steam out of a West comeback drive. He nailed kicks of 49 and 42 yards on the East's last two possessions to keep the West bottled up.

Apparently former teammates Kendall Noble and Nazir Levine set the winning tone for the pair. The two offensive linemen, now playing at Norfolk State and Winston-Salem State, respectively, helped the East start their now three-game winning streak with a 22-14 victory in the 2007 game.

Hahula will be kicking for N.C. Central University in the fall, while Lee will be attending a new institution, the Central Carolina Sports Academy, in Guilford County. He will attend Guilford Tech for his classes and play football for the Academy in hopes of transferring to a four-year school.

Hahula and Lee are the 45th and 46th players to represent Rocky Mount High School in the contest (including current RMHS assistant principal Linwood Weeks who played in the 1980 game). They are also the fifth and sixth players selected under former head football coach B.W. Holt. Along with Noble and Levine, the other two Holt players who have played were Robert Hart and Terrell Hudgins (2005).

The new Big East 3-A Conference will have its sports coaches meet for the first time on Wednesday, Aug. 12 at Hunt High School.
During the gathering the league's football coaches will meet with the media and talk about the upcoming season. They will also make the preseason picks on who will end up on top of the heap once the season is over.
There will be four new head coaches in the league this season - Rocky Mount's Dickie Schock, Wilson Fike's Kim Brown, Northern Nash's Mickey Crouch and Hunt's Randy Raper.
Southern Nash's Brian Foster and Nash Central's Kevin Crudup are the only coaches returning from last season. And perhaps there is nothing new about Raper. After all, he may be coming up on his 20th season at Hunt.
Posted by Charles Alston No comments: