Mabry probable for Friday at Northern Nash; Sharpe on the edge of 1,000 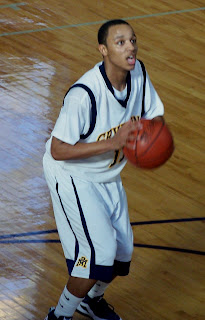 Junior Tashawn Mabry has been hurting lately where the sun doesn't shine.
The 6-5 forward was going in for a dunk in the first half of the Kinston game Saturday night when he was fouled by a Viking player and fell three feet straight down on the court - on his tailbone.
I felt his pain when he hit the floor.
A few minutes later, Mabry attempted to take a charge from a Kinston player and got knocked to the floor on said backside.
He went straight to dressing room for the rest of the half.
He was of little help to his team in the second half and he was in obvious pain.
That pain apparently lingered through the weekend and into this week's play as he missed the game at Wilson Beddingfield Tuesday and at home Wednesday against Hertford County.
Head coach Mike Gainey feels he'll play Friday at Northern Nash provided he can keep loose during play.
The Knights have the best record in the Twin Counties at 12-2 and they will be a tough challenge for the Gryphons (7-6) in their NEW 6 opener.
Two milestones are in reach for Rocky Mount Friday. Mabry needs five points to reach the 1,500-mark in career scoring, while senior guard Alonzo Sharpe (pictured) needs six points to become the school's fifth 1,000-point male scorer.