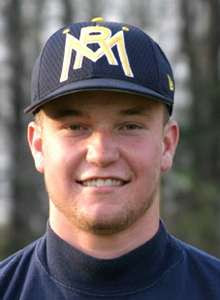 Rocky Mount senior catcher Ben Fish has made his decision as to where he'll play his college ball. Ben has picked Campbell University.
He'll sign in the coming days with the Camels. He made his decision after a campus visit on Monday.
For the first time since 2001, at least three D-I recruits are playing on a Rocky Mount team at the same time. The 1980 team won the 4-A state title with five D-I players: David Downs, Kevin Bunn and Bill Merrifield all signed with Wake Forest, while catcher Jeff Newsome inked with UNC-W and then-junior pitcher Bill Wilkes later signed with Campbell, which may have been in the NAIA back then. Check back with me on that.
In 2001, Paul Jenkins, Carter Harrell and Adam Weaver all verbally committed to UNC, although Weaver signed one season later.

From the current team, senior Brian Goodwin has signed with UNC, while junior lefty hurler Hobbs Johnson has verbally committed to the Tar Heels.
Congrats to Ben and his family (shoutout to Ashley, Macauley and Don!). And he's only a few RBI away from becoming the top Gryphon on that list.
The record is currently held by Jeremy Ward and Chris Berry at 66. Fish entered his senior campaign with 54. He currently stands at 61.
Posted by Charles Alston 1 comment: